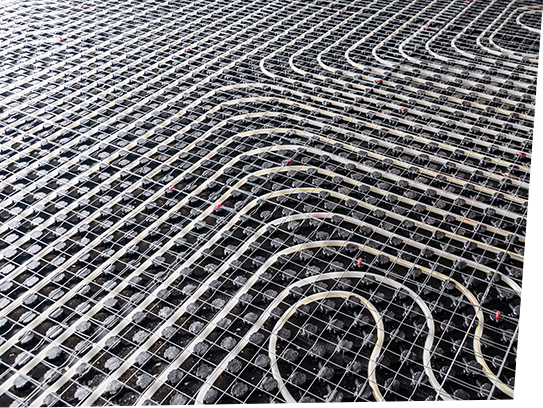 “Floors with underfloor heating generally operate below 30 degrees centigrade. The heating elements are usually incorporated in a suitable reinforced mortar screed with a minimum thickness of 75mm.
Expansion Joints (movement control joints) should be incorporated at the perimeters of the screed, and also around all upstands or anything which penetrates the screed. These joints are usually formed whilst the screed is being laid, by installing preformed 10mm thick strips of expanded polystyrene against the wall or upstand. It is essential that movement control joints penetrate the full depth of the screed. The screed should be cured and allowed to dry out normally for a minimum of 3 weeks, after which the floor should be brought to the intended surface temperature and maintained at this temperature for a minimum of 3 days, then allowed to cool to room temperature before tile fixing commences. Movement control joints should be incorporated at all perimeters and upstands, to coincide with those in the reinforced base screed.”

When tiling over heated or flexible substrates reference should be made to BS 5385-2:1991 which recommends that movement joints be placed at 6m intervals in both directions. The movement joint width should be at least 6mm.

Allow 28 days after completion before initially bringing the floor back up to its operating temperature at increments of ≤ 5 degrees centigrade per day.

Failure to follow these guidelines when installing tiles on heated backgrounds will result in the finished floor cracking and/or tiles debonding from the substrate.